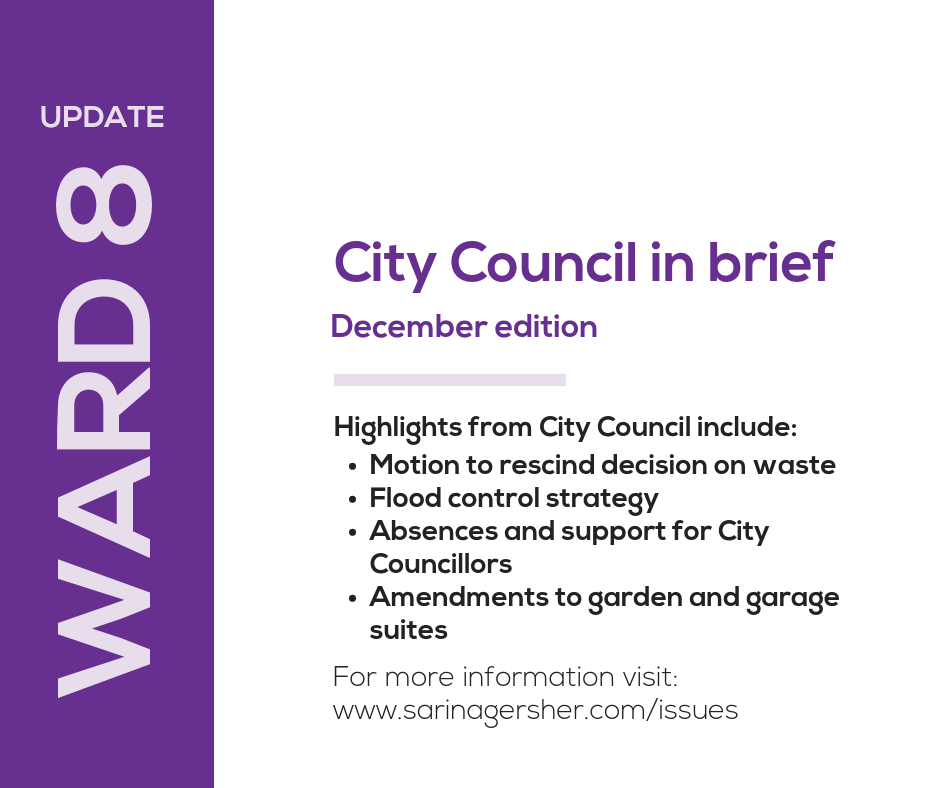 In brief, here are four items of public interest that were discussed during the December 2018 City Council meeting. The full agenda can be accessed here.

Motion to rescind decision on a variable bin waste utility

Based on my previous comments of support for the waste utility and organics program, I did not support the notice of motion to rescind the decision on waste and organics. The notice to rescind the motion which stated "that the curbside waste program variable bin-size model be funded as a utility" was however, approved. There was an amendment which looked to remove the organics program from the property tax. This amendment did not pass. As such, the result is that the curbside organics program for single family residential properties will still be funded through property tax and waste will go back to "status quo".

Unfortunately, we do not have a status quo to return to because as I have stated previously both options (property tax and utility) would have an increased cost for waste because we have consistently deferred payments to the landfill replacement reserve and borrowed further money from this reserve to cover the underfunding of services. We are at a point now that this cannot be kicked further down the road. An illustration of the financial implications of options presented to Council in October and November 2018 can be found attached.

The next steps are not quite clear but could potentially lead to a 4.7% increase in property tax. The earliest the Standing Policy Committee on Environment, Utilities and Corporate Services will receive a report back will be in February 2019.

The Flood Control Strategy proposes infrastructure projects to reduce flood risk in up to ten flood prone areas through a combination of storm water pipes, dry ponds, and underground storage. Flooding has significant financial impacts and other effects on health, safety, and quality of life.

At December's City Council, the approved recommendations from the report read as follows:

1. That the City complete an application for the Government of Canada’s Disaster Mitigation and Adaptation Fund program, which if approved, would be utilized for the Flood Control Strategy set out in this report;
2. That the City undertake a nine-year $54.0 million Flood Control Strategy, subject to approval of Government of Canada funding, as set out in the report of the A/General Manager of Transportation and Utilities;
3. That the Administration proceed with community engagement and subsequent detailed design for a dry storm water retention pond in W.W. Ashley Park to increase capacity for the 1st Street East/Dufferin Avenue area; and
4. That the Administration develop an engagement strategy to follow-up with residents affected by flooding in the last 10 years to ensure an understanding of this proposed Flood Control Strategy.

Absences and support for City Councillors

Currently there are no provisions for Saskatoon City Councillors to request a leave of absence or access any support for items such as maternity or parental leaves, critically-ill childcare leave or compassionate care leave. All of these items fall under The Saskatchewan Employment Act and would allow City Councillors to be eligible for something similar. During the 2019 budget deliberations, a contingency fund of $21,000 was created to build capacity for absences and support for City Councillors. A report was approved during December 2018's City Council meeting that governed how these funds can be utilized. The contingency fund of $21,000 is for 2019 only. A comprehensive review of the legislative budget is being undertaken for future years.

Members that qualify under these terms of The Saskatchewan Employment Act can request that the contingency fund be used to provide temporary administrative staff for the City Clerk’s Office. This support can be accessed whether or not a member seeks to take a temporary leave of absence, as long as they fall under the above definitions in The Saskatchewan Employment Act.

These changes are in response to industry feedback and are in line with encouraging more infill within Saskatoon's established neighbourhoods.

The comprehensive report can be found on pages 44 - 85 as agenda item 6.1.4 at the following link.