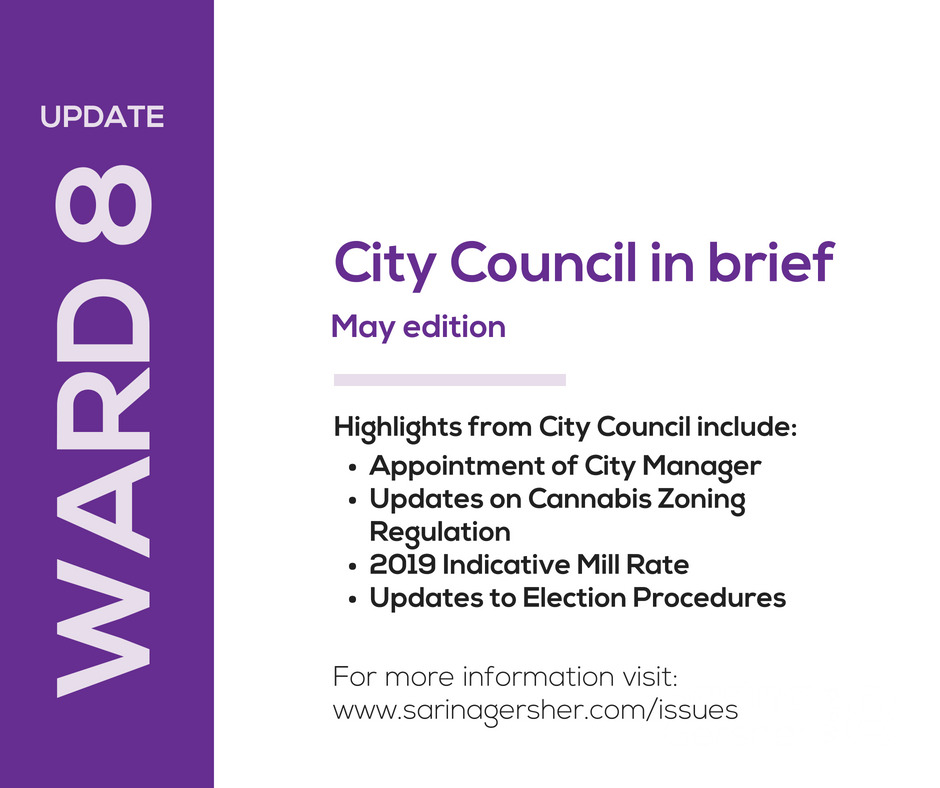 In brief, here are four items of public interest that were discussed during the May 2018 City Council meeting or committee of Council. The full agenda can be accessed here: regular (1:00pm) and public hearing (6:00pm).

At the November 28, 2017, City Council meeting dealing with the 2018 Preliminary Business Plan and Budget, City Council resolved, in part that Councillors Iwanchuk, Donauer, Dubois and Gersher, along with Mayor Clark assume the responsibilities of the Selection Committee for the recruitment of a new City Manager.

The Selection Committee has now completed its process, and the City Council is pleased to announce the appointment of Jeff Jorgenson as City Manager, effective June 1, 2018. This appointment follows a national search which resulted in the submission of 67 applications.

Mr. Jorgenson has been with the City since 1996, with the exception of a brief period in 2008 where he was Vice President of Northridge Developments. He has held a number of progressively responsible positions at the City of Saskatoon, and has been a General Manager with the City since 2008. Jeff has a Bachelor of Science in Civil Engineering from the University of Saskatchewan. He and his wife Arin have been married for 28 years, and together they have two adult children, Tomas and Hannah.

City Council looks forward to working with Mr. Jorgenson and with all civic staff as we work together to achieve our vision of a great Saskatoon for all residents.

There was extensive discussion of the proposed amendments and many presentations from the public and stakeholders. During a Public Hearing, City Council can only accept the bylaw changes in their entirety or reject all the proposed amendments. This is a legislative requirement because Public Hearing items are advertised based on specific wording and expectation of what City Council will be discussing.

As such, City Council rejected the proposed amendments and instructed Administration to redraft a bylaw that incorporates the following items:

The new proposed amendments will be brought back through the Municipal Planning Commission and City Council Public Hearings in the near future. This will ensure a bylaw is in place in time for provincial and federal legislation related to cannabis.

Setting an indicative rate is an important step in the development of a singular or multiyear business plan and budget. A key risk to any business plan and budget is the continuous reworking of assumptions and plans due to moving targets and lack of parameters set at the beginning of the planning cycle. The Governance and Priorities Committee’s indicative rate decision provides the Administration with an indication of their tolerance level for a property tax target early in the process, and also provides the Administration with clear parameters to work within to achieve City Council priorities.

It is important to note that the indicative rate decision is a guideline for the rest of the year, and City Council has the opportunity to set the final budget and associated property tax impact through the 2019 Budget Deliberations at the end of November 2018. This process provides the Administration with a guideline to prepare the budget and provides the public and City Council with an open and transparent process.

Setting an indicative rate is an important step in the development of a singular or multi-year business plan and budget. The City of Saskatoon is anticipating total revenue increases in 2019 of $11.21 million from user fees, external revenue, internal revenue and property taxes. The City’s 2019 Indicative Budget includes total expenditures of approximately $509.3 million, which is an increase of $18.6 million or 3.80% over the 2018 approved budget. The City’s expenditure increase is comprised of growth and inflation in order to maintain the existing service level. The Administration is currently estimating a required property tax of 3.16% in order to maintain the existing level of service. Therefore, a targeted range between 4.0% and 4.5% includes $1.94 million to $3.10 million that can be used to support service improvements and other business plan initiatives. The City remains committed to a culture of continuous improvement. The proposed 2019 budget is possible only because of ongoing improvement initiatives, and these impacts have been included in the proposed business plan and budget.

This information was endorsed by the Governance and Priorities Committee (GPC) this month and was not an item brought to City Council. This report can be found on the GPC agenda here.

City Council considered a report from the Saskatoon Municipal Review Commission Municipal Elections Committee (the “SMRC”) at its Regular Business Meeting held on June 26, 2017. The report contained various recommendations regarding the administration of the City of Saskatoon’s municipal election process. This report was forwarded to Administration for a response.

The recommendations that were endorsed are as follows:

In addition to the above recommendations, City Council asked for further information on financial implications with respect to the mandate, term of office, electoral support of the Returning Officer as well as the dedicated lines of communication and independent locations. This portion of the report is expected to be received during the June 18, 2018 meeting of the Governance and Priorities Committee.