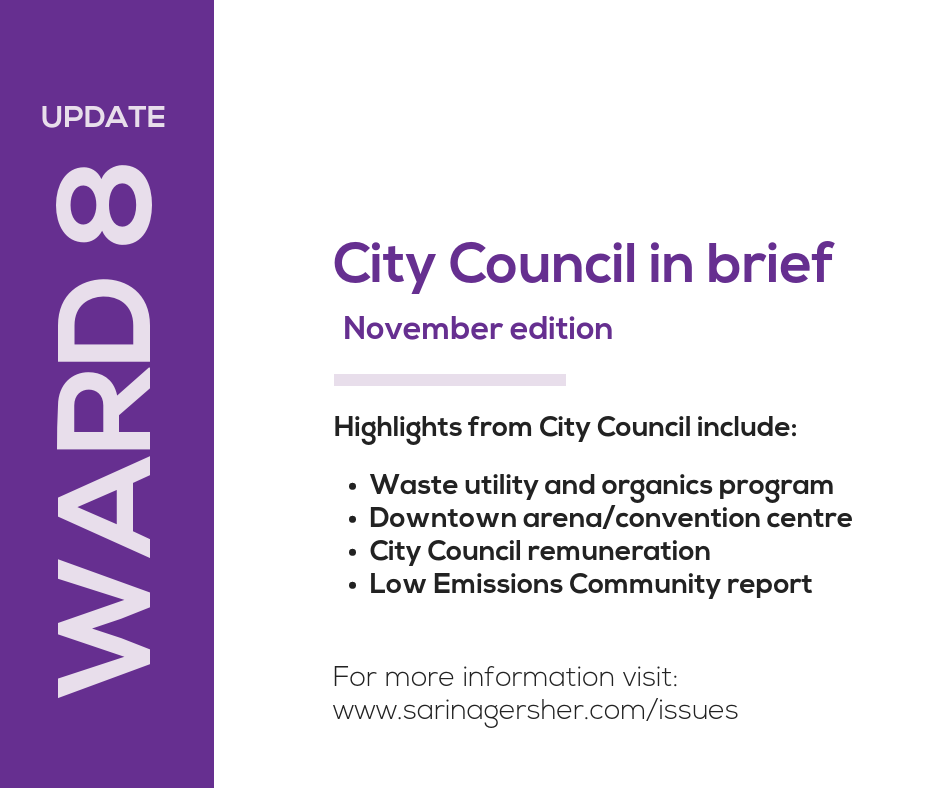 In addition to a new city-wide organics program approved last month, single-family households with curbside collection service will now have a choice in the size and cost of their waste carts. City Council voted in favour of implementing a variable rate waste utility. The previously approved city-wide organics program will be funded from property tax. Both programs are expected to launch in 2020.

The variable rate waste utility will give residents the option of three cart sizes and is expected to incentivize residents to reduce the amount of garbage they generate by wasting less and diverting more through composting and recycling. The variable rate and three cart sizes will provide curbside residents more control over their waste costs. More details about implementation plan and program costs to be presented in 2019.

As way of background, the changes to waste services (garbage and organics) came forward for two main reasons. Our current model for waste services is not financially sustainable and the second is because we are not meeting our current waste diversion target. It costs over $20M to manage our waste programs in Saskatoon and there is currently a gap of more than $2M annually between the amount of funding through the mill rate and the actual cost of the waste management program. For at least the last five years, waste management services have been consistently underfunded (partly with declining revenue at the landfill, but also because not all costs were considered in the business line). In addition, our Landfill Replacement Reserve (LRR) contributions have been deferred  which is not sustainable as we require this reserve for any capital projects at the landfill (e.g. replacing new liners). We have also taken from this reserve to cover the waste shortfall, which leaves the reserve in an even worse state.

This leads to the second point on waste diversion, if we keep using waste the way we do, we will certainly need another landfill within 40 years. Our current tactics are not diverting waste fast enough (our current diversion rates are about 23%, which is one of the worst in Canada) and as such need help to get there. The average household sets out 16kg of garbage each week, which equates to 832 kg per household each year. About 10 per cent of that could have been recycled and 58 percent is food and yard waste. It is very expensive to send items to the landfill that could actually be diverted. A bit more information can be found on this FAQ: https://www.saskatoon.ca/sites/default/files/documents/tu_curbside-uwutopfaq_oct24.pdf or Infographic.

More information on this topic can be found in the City Council reports at the following link as pages 44 - 219.

While I did not vote in support at this time, City Council supported the following recommendations:

1. That the Administration be directed to include a future Arena/convention centre when planning the future of Saskatoon’s Downtown;

2. That the focus of the planning work include consideration of an entertainment district, not just an arena and/or convention
facility;

3. That the Administration report back on terms of reference for a process for identifying the best location for a future entertainment district and how it would fit into a wider vision for a strong downtown for the future;

4. That one of the overall principles be to seek approaches that minimize the reliance on Property taxes to pay for this arena; and

5. That the approach also recognize that while the City of Saskatoon has a leadership role, it will take collaboration with stakeholders and the community as a whole to come up with the best solution.

This gives direction to City Administration and City Controlled Corporations (SaskTel Centre and TCU Place) that rather than renovating the existing facilities, we will be looking to develop one or both of them in the downtown at some point in the future. There are many subsequent steps needed before any development takes place.

More information on this topic can be found in the City Council reports at the following link as pages 845 - 868.

Research on this topic from jurisdictions across Canada that were utilizing the one-third tax exemption, or non-taxable allowance, have considered various options. The most common approach is to adjust the salary of affected officials to ensure the after-tax incomes in 2019 are equivalent to that in 2018. This option proposes to fully adjust the Mayor’s salary in 2019 to 100% of that of
a Saskatchewan cabinet minister. This option has been proposed by the SMRC and it essentially grosses up the compensation levels to provide the same net pay levels to the Mayor and Councillors after taxes. This was the option approved by City Council at this month's public hearing. A copy of the report can be found as agenda item 6.2.2 of the public hearing meeting on pages 204 - 217.

The Low Emissions Community report is a business strategy for identifying specific actions the City should adopt to achieve (GHG) emissions reductions. This was previously referred to as the Climate Change Mitigation Business Plan.

More information on this topic can be found in the City Council reports at the following link as agenda item 9.3.1 on pages 705 - 786.