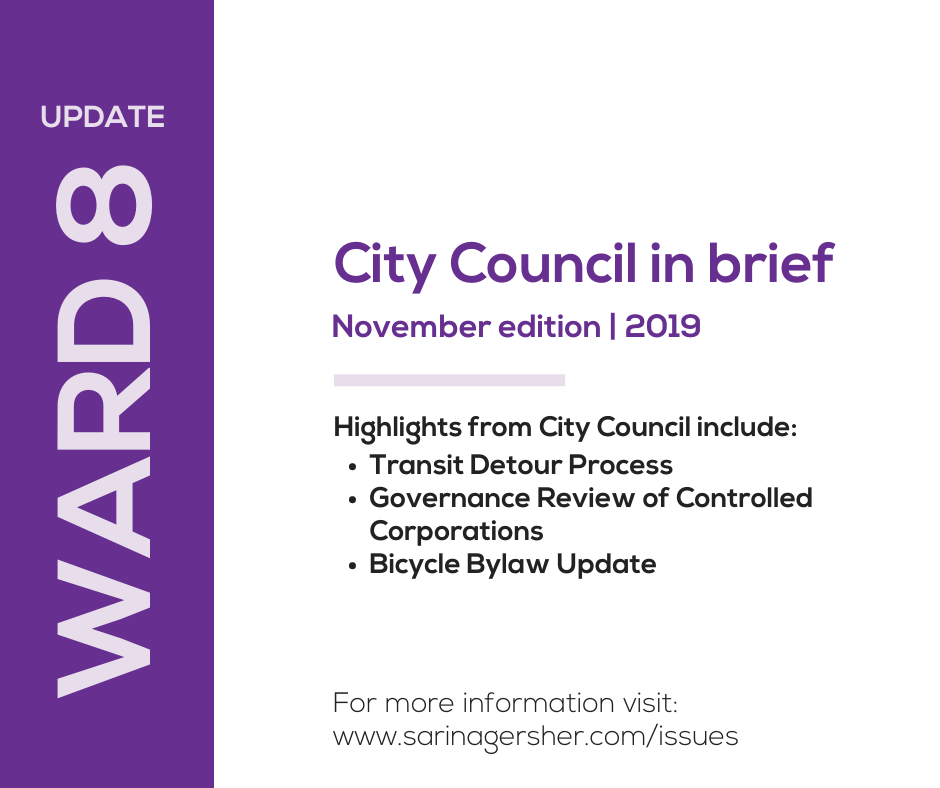 In brief, here are three items of public interest that were discussed during the November 2019 City Council meeting. The full agenda can be accessed here.

Saskatoon Transit uses a primarily paper-based system for communicating temporary transit stop closures and was anticipating moving to a primarily digital approach by April 1, 2020. Due to concerns from riders, the Standing Policy Committee on Transportation requested more information about this change.

Ultimately Council voted that in addition to a digital approach, Saskatoon Transit continue using physical notices for bus detours and changes at the impacted bus stops. To resolve the gap in services and communications, the Committee also resolved that the Administration report back to the appropriate Committee on how they have worked to strengthen information and communication on notices for digital, phone and paper approaches for changes to bus routes, including engagement with stakeholders; and that the Administration report back to the Standing Policy Committee on Transportation on options to improve communication between road detours and Saskatoon Transit.

The City of Saskatoon has established non-profit controlled corporations to oversee the operations of three arts, culture and event facilities: SaskTel Centre, TCU Place and Remai Modern (collectively, the “Controlled Corporation(s)”). This was the second set of reporting on the governance framework for the Controlled Corporations.

The focus of this report is to provide recommendations for changes to the existing governance model of the City’s Controlled Corporations. Changes are intended to standardize processes and simplify Council’s management of the facilities while promoting accountability and transparency.

There were 18 recommendations passed, and the remaining recommendations were referred to a subcommittee of the Governance and Priorities Committee for additional deliberation.

The report can be found as agenda item 9.5.4 Governance Review of Controlled Corporations – Governance Details and Engagement Results on pages 357 - 535.

The last revision to City of Saskatoon Bylaw No. 6884, The Bicycle Bylaw was completed in December 2011, and in light of the Active Transportation Plan, and the evolution of transportation policies, revisions were recommended. The Administration has developed new bylaw content for consideration, after considerable research and stakeholder engagement. The potential bylaw revisions describe the intention of proposed rules rather than the specific text that will form the finalized bylaw. Most revisions are adapted from regulations enacted in other jurisdictions.

The side-by-side comparison of items that will be included in the bylaw can be found on pages 548 - 553, with the following amendment:

Additional recommendations were passed and will be considered when the Bicycle Bylaw comes to City Council:

Some highlights of items include: