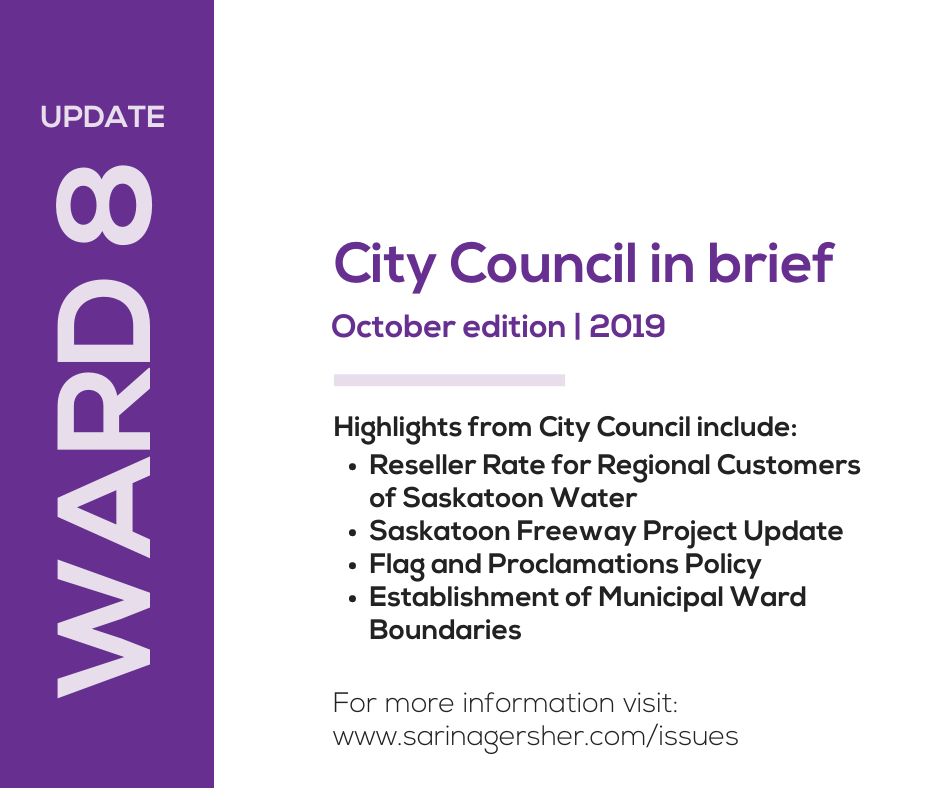 In brief, here are four items of public interest that were discussed during the October 2019 City Council meeting. The full agenda can be accessed here. I was proud to Chair this meeting of City Council as the Deputy Mayor.

The City of Saskatoon, through its water utility, currently sells water to regional communities to SaskWater. SaskWater purchases treated water in bulk at select points in the City’s distribution network, and then transports it to its customers through SaskWater-owned water main infrastructure. The commercial water rate structure and contract with SaskWater dates back to 1983 and requires a significant revision. These changes are critical within the framework of
Saskatoon’s evolving regional partnerships and updates are required to support the proposed joint servicing agreement with the City of Martensville. The creation of a new “Reseller” category for the water rate is recommended, along with an accompanying strategy of collecting equivalent water off-site levies.

The new reseller rate would apply to water sales to SaskWater and would apply in the future to any municipality with a direct servicing agreement with the City. This rate represents an accurate volumetric and transparent valuation of providing water service outside Saskatoon city limits.

As part of introducing the new reseller rate, all water users outside city limits would agree to pay a connection fee equivalent to the water off-site fees paid by properties within Saskatoon. The new fee would be paid directly to the City as a condition of receiving water services. This has the effect of moving towards an “even playing field” with development in the region for water servicing. This also prepares the possibility for additional off-site fees from the future Growth Pays for Growth off-site initiative.

The new set of principles for calculating the reseller rate will result in a lower water rate for regional resellers estimated in 2019 at $2.65 per cubic metre ($6.50 per 100 cubic ft). This will allow a smooth transition for rate payers inside and outside the Saskatoon boundary and allow for the implementation of the connection fees. The form of this connection fee will vary depending on whether the entity is an independent water utility, city, town, or other form of municipality; however, it will be charged in a uniform manner to properly reflect the full costs incurred by a new customer.

The new reseller rate for 2020 and 2021 be “frozen” at the rate paid by SaskWater in 2019. Following the completion of the 2020-21 rate cycle, the reseller rate will be re-evaluated and the next rate cycle will be recalculated for approval by Council. It is important to note that the effect of a rate freeze does not result in a lower water rate for customers outside Saskatoon. In addition to the Saskatoon water costs, all other water customers must pay a local water rate to their municipality to cover the costs of distribution, a local connection cost, and also pay any applicable costs charged by SaskWater. In all municipalities outside Saskatoon, water customers will continue to have higher water rates than customers within Saskatoon.

This report provides an update on the progress of the Province’s Saskatoon Freeway project. The Government of Saskatchewan, through the Ministry of Highways and Infrastructure, is engaging in a functional planning study that will finalize the right-of-way plan, produce project cost estimates, and determine the interchange locations and configurations. The study is scheduled to be completed in 2021. Currently, there is no timetable for a final decision regarding the freeway’s construction.

The study is broken into three phases:

Phase 1 refers to the north section of the Saskatoon Freeway and includes Highways 11, 12, and 16, as well as Wanuskewin Road, Millar Avenue, and the bridge over the South Saskatchewan River. This phase also contains proposed crossings of the South Saskatchewan River and a Canadian National Rail line.
A study team held a Design Workshop on June 27 and June 28, 2019, which brought together a diverse group of stakeholders to select a framework to address Phase 1 of the study - specific to the segment for Highway 11.

This will be the first of many update reports. This report was prepared by the City of Saskatoon Administration and is based on our participation throughout the study. The Province of Saskatchewan has set up a specific page for information and updates about the project. It can be found here: saskatoonfreeway.org.

The Flag and Proclamations Policy is intended to be the initial step in an effort to take a comprehensive approach to addressing existing and emerging protocol related issues. In general, the Policy is intended to identify consistent standards and address the basic requirements relating to protocol. In the short term, the Policy is limited to addressing flag etiquette, flag raising and proclamation requests and the criteria and process to be applied in considering these requests.

The current wards were established by the Municipal Wards Commission in 2016, and were effective October 26, 2016. In accordance with Section 59 of The Cities Act each ward of the city must have, as nearly as is reasonably practicable, the same population. The Act states that the Municipal Wards Commission shall establish a quotient for each ward by dividing the total population of the city by the number of wards into which the city is divided, and that the population of each ward must not vary by more than 10% from this quotient.

Changes related to Ward 8 can be found on this blog post.