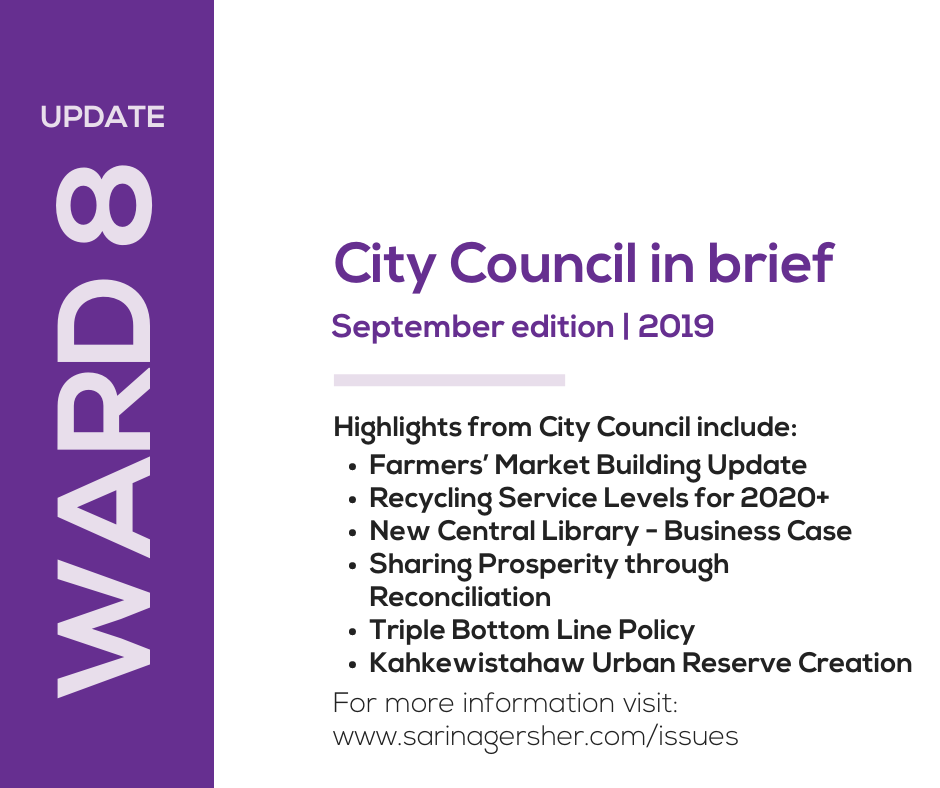 In brief, here are six items of public interest that were discussed during the September 2019 City Council meeting. The full agenda can be accessed here.

The purpose of this report was to provide an update on the status of the Farmers’ Market Building in River Landing, and provide information about next steps in the process.

At its September 24, 2018 meeting, City Council directed the Administration to “prepare and issue a Request For Proposal to lease the Farmers’ Market
Building within River Landing, seeking a proponent to develop and manage a six-day-a-week animated public facility and farmers’ market and
revising the proposed scoring matrix in order to provide specific consideration for:
• Dedicated farmers’ market days;
• More explicit evaluation of ‘authenticity’ with respect to local produce and content.”

At the time of that vote, I did not support the motion to issue an RFP. However, the motion passed.

Related to the required roof repairs, an RFP was issued in August 2019, for an expert to advise on the best type of roof system to be installed on the Farmers’ Market building, including costs, warranty, lifespan and scheduling (due to weather). Due to the nature of the roof repair work, which will involve some degree of demolition, a full closure of the Farmers’ Market Building is required. The work will begin sometime in early 2020, after the conclusion of current lease agreement. The exact start and completion dates for the roof repairs, are undetermined at this time because it is dependent upon the preferred roof repair approach. The work is not anticipated to affect the potential of an outdoor farmers’ market in 2020 in the Market Square.

City Council holds firm that the Farmer's Market Building should contain a strong mandate for local food access, including a minimum of two days of dedicated farmers' market days. The lease criteria is outlined in Appendix 1 of the report. With this criteria as the foundation, Administration continues to
search for an entity that can develop and manage an animated six-day-a-week public facility that includes a farmers’ market component operating for a minimum of 2 days per week at the site.

Since the RFP to lease the Farmers’ Market Building was cancelled due to the roof repair, no tenant was secured.

The current lease for the Farmers’ Market Building is $10/year, plus a contribution to the City’s Civic Buildings Comprehensive Maintenance Reserve to help with any capital repairs to the building. It is anticipated that a subsidized lease rate (with City Council’s approval) would be considered for the future tenant of the building. The leasee would also be responsible for property tax, insurance, utilities and leasehold repairs, which is consistent with the current lease terms.

Once the date for roof repairs is confirmed, a new RFP will be issued for a tenant for the Farmers' Market Building at River Landing. Anyone, including the current tenant (Saskatoon Farmer's Market Co-operative) is able to submit a bid.

City Council also passed a resolution that the Administration be directed to prioritize animation at minimum the outdoor space for the 2020 season including a farmers’ market in the event the indoor space is not available and/or that a tenant is not secured.

Curbside Residential Recycling Service Levels for 2020 and Beyond

December 31, 2019 marks the expiration of the City of Saskatoon's seven year agreement with Loraas for single family home recycling. As such a new contract needs to be issued. This is done through a Request for Proposal, which is an open process for any vendors to submit a bit. As this RFP is still in active negotiations, information on which vendors have submitted bids is not publicly available, as it impacts the integrity of negotiations.

This report showed high-level results from the bids about what items are able to be accepted in this next phase of the program. The options presented to Committee and Council appear to be a win-win since Saskatoon still sits on the cheaper end of the spectrum for costs to the offer the program, compared to national counterparts. For the most part, our program is staying the same as was previously offered - which has not been the case in other municipalities. The approved recommendation at City Council is to keep the program as is, except for the removal of two items (black plastic and polycoat (i.e. beverage cups)) will no longer be accepted due to the inability to recycle these materials. As such, the items that are being recommended for inclusion are:

Currently the cost per household for recycling is $5.66 per month, with the new program ranging from $7.00 to $7.50. The previous price was set out in a contract seven years ago, and with such a dynamic recycling market having an increase of less than $2 a month if on the lower end of recycling costs nationally.

In addition to the blue bin program, City Council supported continuing the additional option of glass recycling at Sarcan. This is simply another option for residents but not a removal of glass from the program. With this option, glass containers are more likely to remain intact as compared to curbside collection, therefore resulting in a higher recycling success rate. Through the first six months of the program, approximately 60 tonnes of glass were collected, which is higher than what is able to be recycled through the curbside program. The glass collected through the depot option is also recycled into new products, including glass beads for road paint and fibreglass insulation.

The Saskatoon Public Library presented the Business Case for the new central library to City Council. The business case was presented for information, as the City of Saskatoon does not have a direct role in this project. The reason information was before City Council is because the SPL cannot carry its own debt. City Council approves their budget and tax levy annually, but does not have any control over the operations of the Library. The SPL is governed by a Board of Directors and has its own CEO. These two bodies work on the operations of the library.

The new Central Library is a project that is housed and managed within the Saskatoon Public Library. The Library has established a dedicated website with the business case and community feedback to date (https://saskatooncentrallibrary.ca/).

At this time, City Council requested the following pieces of additional information from the Saskatoon Public Library Board:

Additional information from City Hall was also requested for the following:

The main objective of the proposed protocol agreement is to establish foundational principles and meeting protocols that will lead to the development of a common work plan over the next five years. In doing so, the agreement provides a mutually beneficial joint course of action with each party taking responsibility for achieving a productive working relationship.

The draft Triple Bottom Line (TBL) City Council Policy intends to outline the City of Saskatoon’s general position with respect to the concept of sustainability. An attached TBL Decision Making Tool has been designed as complementary, yet important, piece to the TBL Policy. In other words, it attempts to
“operationalize” the policy, by assisting City employees and decisions makers when planning new initiatives or re-evaluating existing initiatives. The objective is to consider how to integrate as many TBL indicators as possible into the City’s work, while avoiding trade-offs, negative impacts, and significant adverse effects.

The TBL Policy was approved, with implementation beginning in January 2020.

City Council approved the Municipal Services and Compatibility Agreement between the City of Saskatoon and Kahkewistahaw First Nation this month. This is required in the Treaty Land Entitlement Framework Agreement prior to land being set apart as Entitlement Reserve in an Urban Municipality.

Kahkewistahaw owns 40 acres of land at 1215 Claypool Drive in the Hampton Village Business Park area in Saskatoon. This was designated as an Urban Reserve.