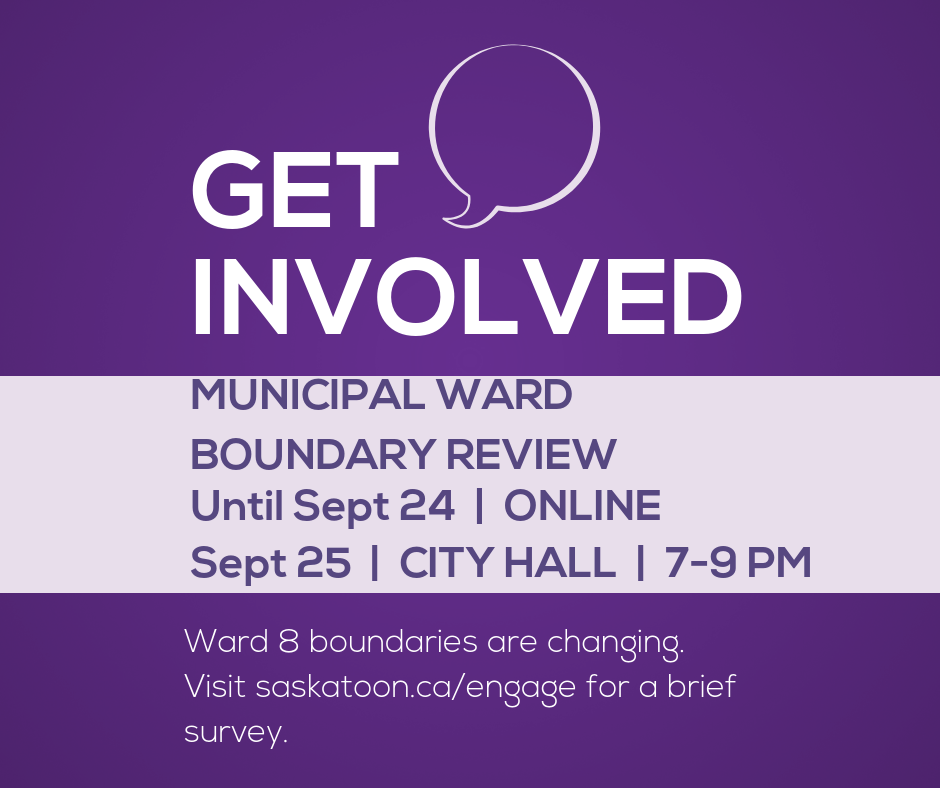 The Saskatoon Municipal Wards Commission is seeking insight and information from citizens of Saskatoon as the Commission looks to establish new ward boundaries for the municipal/school boards' elections in fall 2020 because of population growth and shifts since the 2016 election.

The City of Saskatoon is divided into ten wards. The Cities Act stipulates that each ward must contain approximately the same population, with ward populations varying by no more than 10% from the average ward population (the City's total population divided by the ten wards).

Currently, the populations of Ward 7 and Ward 10 exceed the 10% variance while the populations of Ward 5 and Ward 8 fall below the threshold. Accordingly, the Municipal Wards Commission will establish new ward boundaries to be in effect for the city's municipal election and school boards' elections in fall 2020. Of note, reconfiguring the ward boundaries to ensure all ten comply to the legislated population range will affect the boundaries of other wards as well in all three options.

This means that for the 2020 municipal and school boards' election, Ward 8's boundaries will change.

The Commission is looking at three potential options for redrawn ward boundaries.  Considerations in the establishment of these options included: current population of each ward; projected future population growth throughout Saskatoon; and public input received.

Please click on the following links to see the current ward map as well as the three potential options for ward boundaries in the 2020 election.  The option maps each include a description of which neighbourhoods would be changing wards.

In the case of Ward 8, Option #1 will add a new neighbourhood to the ward (Nutana S.C) and Options #2 and #3 will remove Brevoort Park from the ward but add Wildwood in its place.

The Municipal Wards Commission will be holding a public consultation session regarding the three potential options on September 25, 2019 from 7:00 PM until 9:00 PM in Committee Room E at City Hall.

You can also provide your feedback by filling out this brief online survey.  This survey will close for submissions on September 24, 2019 at 5:00 PM.

Further information can be found on the City of Saskatoon's engagement page or the general website.