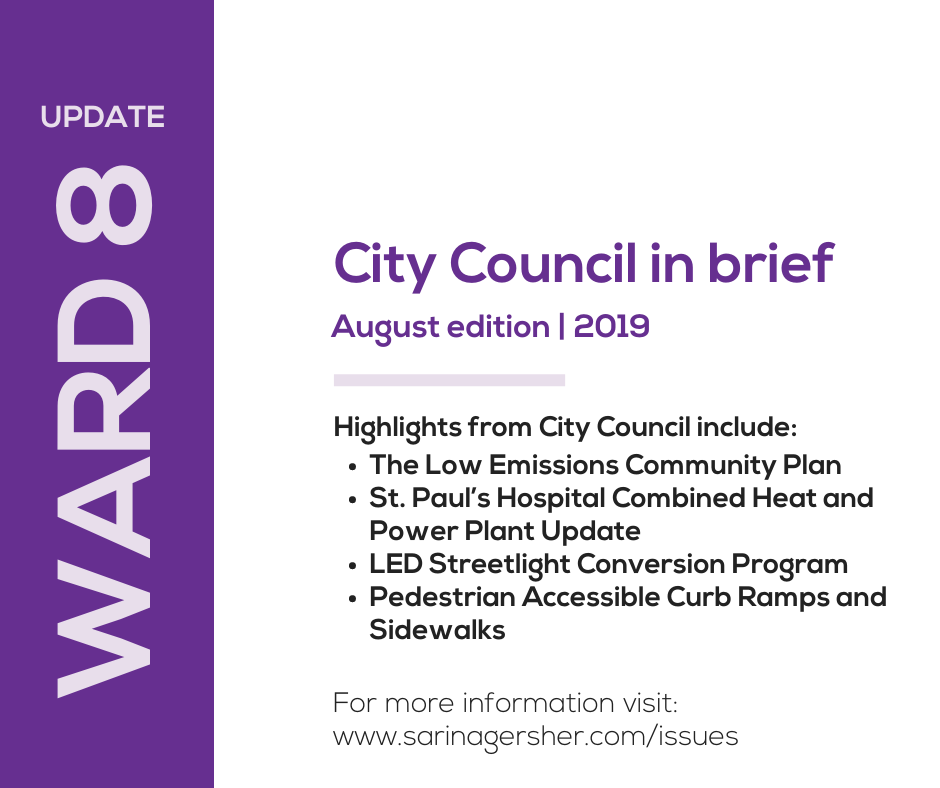 In brief, here are four items of public interest that were discussed during the August 2019 City Council meeting. The full agenda can be accessed here.

The Low Emissions Community Plan was been presented to City Council this month. City Council gave direction to pursue the next steps in the plan and begin to do so through community consultation/engagement. The plan itself can be found here, with general information at Saskatoon.ca/climatechange.

In order to meet GHG emission reduction targets and to optimize financial and social benefits for the City and the community, a coordinated and comprehensive plan is needed. The Low Emissions Community (LEC) Plan provides specific actions which can guide the City in facilitating and leading corporate and community GHG emission reductions. In alignment with climate change commitments, it lays out a road map for reaching 80% community and City emissions reduction by 2050. While the LEC Plan models actions for the successful reduction of Saskatoon’s GHG’s, it also highlights significant financial and social benefits when compared to Business as Planned.

In order to achieve the societal and economic benefits outlined above, the LEC Plan uses the principles of Reduce, Improve and Switch to propose and prioritize the map for GHG reduction. Actions are categorized into sectors including: buildings, transportation, land use, energy generation, water conservation, and waste management.

There are many components to the plan, including 40 actions. These actions are split into four phases, over the 30 year plan. There are preliminary actions from this plan that will be before Council for budget deliberations. Depending on the amount of actions that are funded,  this will determine how the next steps in engagement and consultation take place.

City Council directed this month that the City of Saskatoon enter into a Memorandum of Agreement with the Saskatchewan Health Authority to co-develop, own, and operate a Combined Heat and Power Plant at St. Paul’s Hospital.

The implementation of CHP at St Paul’s Hospital is identified as one of the top 10 actions with greatest savings per tonne of emissions through the Marginal Abatement Cost analysis in the Low Emissions Community Plan. CHP plants operate on natural gas to produce both electricity and heat at the same time, with less greenhouse gas (GHG) emissions than producing each separately. The CHP plant will produce electrical energy for Saskatoon Light & Power and thermal energy for the hospital for use throughout their heating systems. The life expectancy of the CHP plant is 15 years with average annual GHG reductions estimated at 2,361 tonnes of CO2e, which is the equivalent of removing 723 cars from the roadways.

This approved project looks to replace the existing High Pressure Sodium (HPS) fixtures with new Light Emitting Diode (LED) fixtures. This project would replace approximately 17,800 streetlight fixtures on roadways and park pathways. The 17,800 fixtures represent 66% of all lights operated by Saskatoon Light & Power, bringing the total number of LED fixtures within the utility to 21,750 (80%).

The LED fixtures that will be installed meet the City of Saskatoon (City) standards for roadway illumination, as well as light trespass and dark sky requirements. A light colour temperature rating of 3,000 degrees of Kelvin will be used.