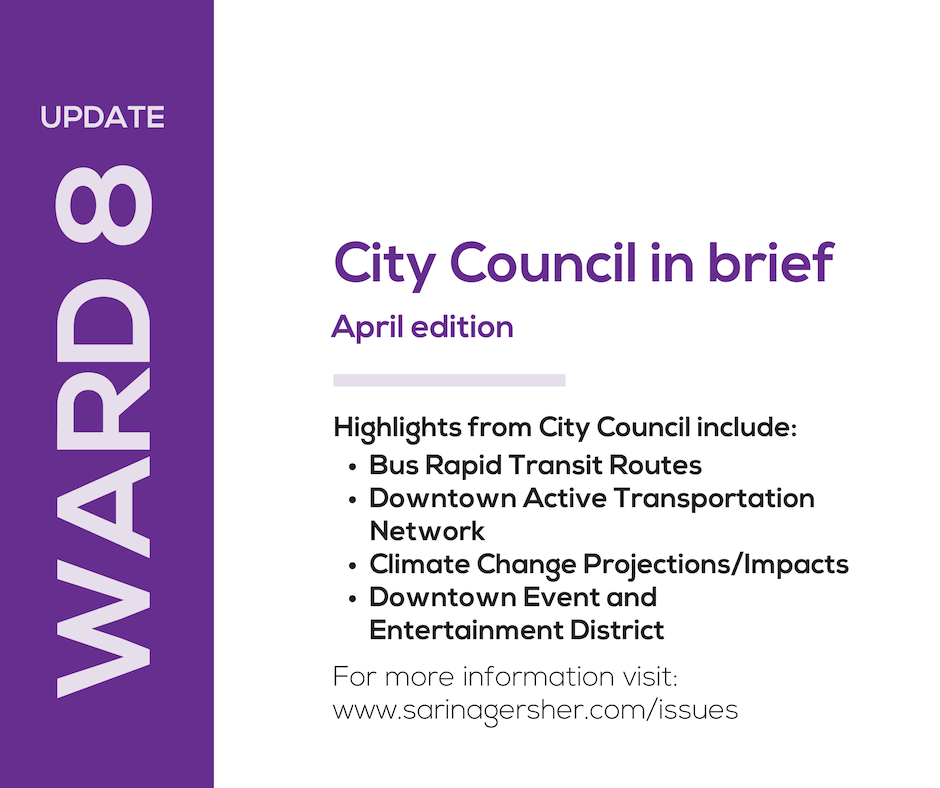 In brief, here are two items of public interest that were discussed during the May 2019 City Council meeting. The full agenda can be accessed here.

As described in the Downtown Active Transportation Network section, the Bus Rapid Transit (BRT) plan has been almost ten years in the making. A key element of the Plan for Growth and Active Transportation Plan is rethinking the way in which the City provides transportation options to existing and future residents. As Saskatoon grows to 500,000 people, it will require a variety of transportation options to ensure the safe and efficient movement of people and goods throughout the City. The proposed transit plan focuses primarily on building a BRT system and identifies changes needed to the current transit system to support high-frequency, direct service along the city’s major corridors. For the system to be successful, Saskatoon needs to reconfigure its transit network around the BRT line, and this means fundamental changes in how the transit system operates.

I am pleased to report that City Council confirmed major decisions about the routing of the future BRT project. The following recommendations were approved:

What does this mean?

Next steps include Administration proceeding with detailed design of the BRT system including implementation planning. This will include continued work and engagement with the community on the reconfiguration of the conventional transit system to ensure it supports BRT and the goals of the overall transit plan. Budget requests will be brought forward at the appropriate time, which will most likely be accompanied with matching federal and provincial funds through the ICIP funding program.

The process with which we got here today has been almost ten years in the making. Starting in 2010, Saskatoon Speaks was launched, where the City of Saskatoon began a process of developing a Community Vision and strategic plan and for the City. This informed the Strategic Plan 2013 – 2023 which led to Growing Forward: Shaping Saskatoon, a two and a half year, five-phase community planning process that led to the creation of the Growth Plan to Half a Million. In April 2016, Saskatoon City Council unanimously adopted in principle the Growth Plan to Half a Million. This directional document is made up of several themes that form a new growth model for Saskatoon, to recognize that change would be needed. The themes include: Corridor Growth, Transit, and Core Bridges serve as the core strategies within the Growth Plan. Including Employment Areas, Active Transportation (AT), Water and Sewer, Financing Growth. As such, we are now in the implementation part of this plan that was almost ten years in the making. The Growth Plan was developed knowing Saskatoon’s population is expected to double to half a million people over the next 30 to 40 years.

Why do we need an AT Plan? We have current conflict with all modes of transportation (cycling, motorists, pedestrians). There are bad examples and good examples of all of those modes and we need to be able to provide safe spaces for folks to move in. Frankly, there are places within our city center where we cannot expand our road network further (e.g. Broadway, 8th St, downtown). If we take all current transit and cyclists and eliminate spaces for them to be, there main alternative will be driving. How would this impact folks who rely on driving as their main form of transportation? Currently there are 9.5 million transit rides, 8% of residents walking, and 4% of residents cycling. Without options for transit or cycling, these folks would most likely rely on driving to get around. Now if we picture the space needed to accommodate growth as our population double, we will simply have congestion that we cannot eliminate.

Furthermore, Saskatoon currently has one of the youngest median ages in Canada with approximately 33% of our population being under 30 years of age. We want to keep those folks in our city. Business attraction, as labour has become one of the most critical inputs for firms. Employees aren’t just looking for good jobs now, they want to know they are moving and living in a great community. Research has shown that people tend to move to cities with plentiful amenities, which includes transportation of all modes.

Therefore, in recognizing the need for a protected cycling network in the Downtown, but making sure we take time to design a space that is more user friendly for all, City Council voted for the following:

This report summarizes the expected climate change projections and possible impacts to the Saskatoon region and the risks these changes pose to the City of Saskatoon’s (City) infrastructure, programming and service delivery. The report highlights the following:

The full report can be found as agenda item 8.3.2 on pages 583 - 591 found here, with additional information available here.

To ensure the best chance of realizing the most advantageous vision of a Downtown entertainment district, centered around a Downtown arena and convention center, work is underway with the goal of making a site selection for these facilities in 2019.

Next steps include confirming viable sites for consideration, completing detailed analysis to determine the preferred sites, and undertaking stakeholder and public engagement for feedback on the preferred sites. These inputs will then be brought to City Council to inform their decision on site selection.

In the next round of reporting, I will be keeping an eye out for reporting around a prioritization process for projects in the Downtown. It will be important to understand the financial implications of this decision and how we can fund the project while recognizing other priorities and projects.